The very first Ecobear named Harvest was born 29th February, 1996 in Yorkshire, England. It only seems like yesterday! 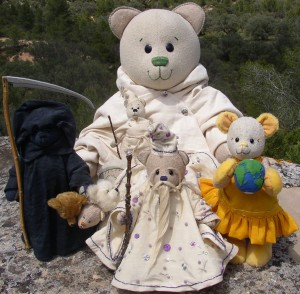 We kept the original Harvest in a suitcase for prosperity – and to see how well he faired over the years. Thankfully he’s still in one piece. The designs of more modern Ecobears have changed dramatically from those early teds. However the principals are pretty much the same – to craft eye-catching characters with a story to tell. 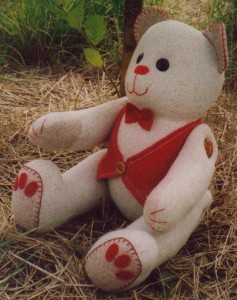 Thankfully the workmanship and creativity has continued its learning curve over the past 16 years of Ecobears’ existence. It is as much fun now as what it was back then – with the added bonus of being able to use renewable energy to make present day critters – that will hopefully last a lifetime.
This occasion got me to thinking: What is a Leap Year? Why do we have them?
A Leap Year consists of 366 days, as opposed to a normal year, which has 365 days. During Leap Years we add a Leap Day, an extra day on February 29th. Nearly every 4 years is a Leap Year in our modern Gregorian calendar.
Apparently, according to Google, ‘Leap Years are needed to keep our calendar in alignment with the Earth’s revolutions around the sun. It takes the Earth approximately 365.242199 days – or 365 days, 5 hours, 48 minutes, & 46 seconds (a tropical year) to circle once around the Sun.’ 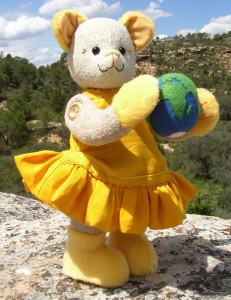 However, the Gregorian calendar has only 365 days in a year, so if we didn’t add a day on February 29th nearly every four years, we would lose almost six hours off our calendar every year. After only 100 years, our calendar would be out by around 24 days!
Mmm – mind boggling stuff. So just who did invent Leap Years? Well it’s interesting to learn that Julius Caesar introduced Leap Years in the Roman empire over 2000 years ago. The Julian calendar had only one rule:
‘Any year evenly divisible by four would be a leap year.’ This eventually ended up in too many Leap Years, but didn’t get corrected until the introduction of the Gregorian calendar over 1500 years later.
Well, we hope you find our bears intriguing, unusual & fun – I say this because we’re looking forward to a great Birthday event. The brand new Ecobears website is being built as we speak – and will be ready soon with lots of new fun stuff: Fab bears, toys & gifts; colouring sheets, puzzles & games; and also the wonderful Ecobears children’s book. Watch this space!