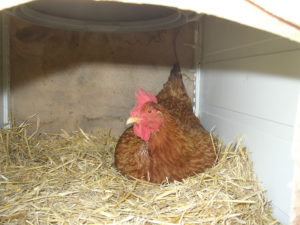 Last year we had a few chickens who turned out to be fun to have around and a bonus if they laid any eggs. We lost a couple along the way, campo life being what it is; harsh & cruel at times. One of the hens was taken out by a huge eagle who had been circling above the pen for days, before swooping down to capture the hen and decapitating the poor thing in the process. Not a pretty sight. We have learned to put washing lines across the top of the open part of the pen; this helps prevent large winged predators from fancying their chances getting in so easy.
Recently some pals came to visit and said they had a lovely, chatty domesticated hen living with them, and would we be interested in having her as we have plenty of space? They thought she would be better off with us than on her own in their townhouse back yard. We’d built an enclosed pen a few years back, and had used it for the previous chickens – so there was an instant chicken coup, complete with almond tree, for her to move into. So we agreed to have her. 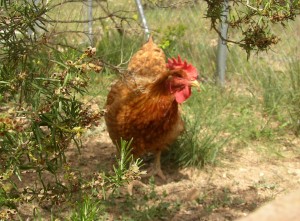 Chukki checking out her surroundings.

A couple of days later they brought the new family member in a box up to our house. Then she was placed into her new home, having a good look around investigating her surroundings. Within minutes she’d settled in and was ‘bob, bob, bobbing’ chirpily. It was obvious she was pretty much domesticated. She looked quite a lot bigger than the ones we’d had before too.
But something didn’t feel quite right. She looked soooo alone! It felt odd to just have one chicken, so lonely looking. Over the following days we went in to feed her and check she was okay. She seemed to quite like the safety of her hen hut, but ventured out when we came to visit. Poor Chukki, it didn’t seem fair to leave her on her own. She needed company, we felt. 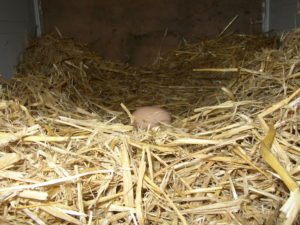 Chukki had laid her first egg on the second day she was with us. It’s great collecting fresh eggs for breakfast. She was happy to be hand fed bits of brown bread, and fair tucked into what looked to be zillions of ants on the ground, who themselves were busy trying to escape with bits of her corn for themselves.
We made the decision then that Chukki needed company as soon as possible. So off we went to order three more chickens from a local agricultural feed shop. Fiestas permitting they were to be picked up the following week. In the meantime, as is typical, we were offered as many hens as we wanted; about eighteen needing rehoming! We declined the offer and decided to wait for the chickens we had ordered, (guaranteed layers, apparently). 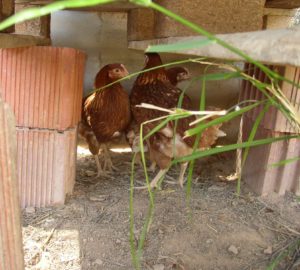 Finally, a week later than anticipated, we got a phone call to say the new chickens were ready to pick up. So we dashed over to the agricultural shop and there they were with numerous others, ready to be plucked out of their box and placed in the back of the car in a round container complete with mesh lid. They were brought home and promptly placed in with Chukki.
“There you go, Chukki. You’ve got company now.” Chukki didn’t seem the least bit impressed with her new companions. In fact she was positively uninterested and carried on pecking at the ground in her own little world. The three new chickens looked a little lost at first, and seemed very shy hiding underneath the henhouse for some time. Even after a few days Chukki still didn’t seem to be interested in the new companions. So much for needing company!
Finally, after another week or so we can see some ‘bonding’ taking place. The three new chickens (who still aren’t named yet) are finally coming out of their shell. They venture out more and more as each day passes, and follow Chukki around, who now trots about like an old mother hen, happily showing the new chicks how tasty the little ants on the ground are. Chukki has real character and is funny to watch. Listening to her clucking away in a ‘bob, bob,bob’ manner is pretty funny too.
We’ll keep you posted as to the chicken’s progress in a few weeks time…
Tags: agricultural, campo, chickens, eagle, eco, Ecobears, eggs, farm, fun, green, green living, hen, henhouse, hens, land, sustainable, trees