Over 100 years prior to the conception of Ecobears the Teddy Bear was born as a result of political satire.

In 1902 the Governor of Mississippi invited President Theodore Roosevelt on a hunting trip, while the President was on a trip to settle a border dispute with Louisiana.  Mr. Roosevelt, an avid sportsman, accepted.  While on the trip the other members of the hunting party used dogs to chase a black bear into exhaustion and proceeded to tie it to a tree.  They then invited the President to fire the shot to finish it off.  The President refused as he perceived it to be unsportsmanlike.  There are a few versions of this story.  Another has the bear being a mother and cub that were captured as the hunting trip failed to produce a bear.  Either way, when the news of this humane act reached political cartoonist Clifford Berryman at the Washington Post he published a cartoon entitled Drawing the Line, as reference to both the border dispute and the refusal to act in an unsportsmanlike manner.

When shopkeeper Morris Michton saw the cartoon he was  inspired to create a stuffed bear and place it in his shop window with a sign that read “Teddy’s Bear”.  The bear was so popular that the Ideal Toy and Novelty Company, which we know today was born.  In Germany, at the same time, the Steiff Company began producing bears designed by Richard Steiff who was not aware of the Michton bears.  The Steiff bears were shown at the Leipzig fair in 1903.  Most of the bears made during that era were seated humpback bears or realistic bears that were on all fours, very often with wheels as pull toys.  Some of these early bears command prices at auction in the thousands of dollars today.

In the campaign of 1906 when Roosevelt ran for re-election he travelled with a live bear cub as part of his campaign strategy.  This further increased the popularity of stuffed bears with adults and children alike.  It was actually fashionable for a well dressed woman to carry a stuffed bear.  By this time dozens of companies took advantage of the bear fad.

The popularity of  Teddy Bears waned shortly thereafter but remained steady until the 1980s when there was a huge resurgence in their popularity driven by the sudden favour of American Country furniture and accessories and the 80th anniversary of the Teddy Bear in 1983.  Companies like Dakin, Gund and Steiff started producing anniversary and limited editions.  Names emerged on the scene like Vanderbear and Bialosky, named after his creators Peggy and Jeff Bialosky and licensed by Gund.  Smaller companies both in the US and abroad took advantage of the Bear Renaissance.  Crafters started selling homemade bears at country fairs and craft shows made of limitless materials and colours.  Some of these designer bears became highly collectable.  Then came the Beanie Babies, mass produced by Tyco, which signalled the end of the Teddy Bear market’s golden era.

Today we are closely observing wild bears as barometers of environmental health.  We are all familiar with the plight of the polar bear, losing its hunting and breeding ground to the effects of global warming.  We see the panda bear as a curiosity confined to zoological parks as their bamboo forest habitats quickly vanish.  Cute, plush versions of these involuntary, environmental spokesbears are being sold in huge numbers to raise money for the National and World Wildlife Federations and other environmental groups.

Ecobears are now doing their part by being a leader in environmentally friendly products; making bears from renewable natural fibres and recycled materials, with the help of photovoltaic solar energy. 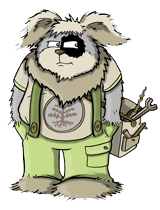